After trying criminal cases for over 30 years, in Bureau County as a prosecutor, Attorney Pat Herrmann believes two things determine the outcome of a case, the provable evidence of the case and the lawyer’s ability and willingness to present that evidence at a trial. 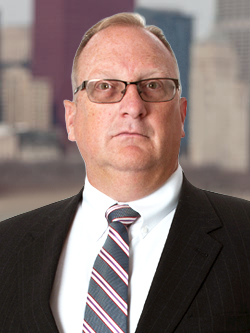 Many victims and victims’ families are thrust into the justice system through no fault of their own and the justice system is completely new to them. Pat and his staff would sit down with victims and their families and hear their concerns and questions. Pat takes great pride and satisfaction in predicting a probable outcome and then obtaining that result on behalf of the victim and the state. It is this experience that Pat wishes to continue in representing injured parties and civil cases.

Pat comes from a blue-collar family that raised nine children. Working through college and law school, Pat developed an insight into understanding people and solving issues with practical common sense. He and his wife Charlotte are now raising four daughters of their own. After 30 years of public service, Pat is looking forward to helping people in the private sector. Working with Meyers & Flowers, LLC and Klint Bruno will be a wonderful way of doing just that.

Feel free to reach out to one of our experienced attorneys with your questions at (630) 491-6277 or schedule a
Free Case Evaluation to find out how we can help with your case.